The Great Central US Shake Out

That's when The Great Central US ShakeOut's Indiana drill takes place. No matter what the "psychics" and pop prognosticators claim, there is no sure way to predict an earthquake. It can happen at any time, and with no advance notice. At least when a tornado occurs, we generally have some time to get to a safe place. Earthquake preparedness is not to be put off; it can literally be the difference between life and death for thousands of your neighbors in the Hoosier state.

From the ShakeOut site:

Indiana has several faults, but, unlike California’s famous San Andreas Fault, nearly all of our faults are buried and can’t be seen at the surface. Researchers have been able to map some faults in Indiana using evidence found in rocks from oil and gas wells and by employing a method called reflection seismic profiling. This method involves recording man-made vibrations reflected off layers of rock below the surface. Most of the faults that have been mapped in Indiana are located in the southwestern corner of the state. These faults extend into Illinois and are collectively known as the Wabash Valley Fault System.

The Indiana Geological Survey also offers an EarthQuake Hazard Map, showing which areas in Indiana are at the greatest danger of liquefaction. Unconsolidated sediment proves to be an effective medium for amplifying the waves of an earthquake, increasing the potential for damage. The soil which seems so solid under our feet starts to act like a liquid. A nifty demonstration of this, using a wheelbarrow, was created by a denizen of Christchurch, NZ after their recent earthquake.

The ShakeOut site also includes this video, illustrating how a drill is executed.

The Future of Under Indiana

Since it's been about three months between posts here, I figured I'd write a bit about what I'd like to do with the blog.

Basically, I'd like to bring in some other writers from Indiana. I'd like this to be something like Deep Sea News, a vibrant place for Indiana natural history and relevant current events to be discussed.

My other blog, Love in the Time of Chasmosaurs, has really picked up steam, and I can't forsake it to build this one all on my own. My wife and I are currently in the midst of figuring out our next step, which also takes a fair share of time - figuring out how I'd make a freelance career work (check out my new portfolio site), researching and applying to masters programs, sorting out just what we'd do with our current life in the event I start on one of those paths. Oh yeah - I work full time, too.

Still, I believe in the idea behind Under Indiana and I know it has a place in the science blogosphere as well as in local culture. Indiana has no shortage of fascinating prehistory, from the ancient Mississippian shores to the forces that shaped the shore of Lake Michigan. The remnants of Pennsylvanian coal forests have a direct and culture-shaping effect on us. There isn't a county in the state that doesn't reveal the influence of geology, and this is a valuable lesson for anybody with the curiosity and willingness to learn.

I'm open for ideas and for new contributors, and I'm mulling over ways to create the blog I envision. In the meantime, please let me know what you think via the comments or by email.
Posted by davor at 2:19 PM No comments:

Interview with Hoosiers Doing Something

Head over to the blog Hoosiers Doing Something, written by fellow Indiana guy Erik Fox, to read an interview with yours truly. Erik asked me about what the paleoblog world is like, how dinosaurs stay so popular, and what it's like to get to know the deep history of your local area. You'll also get to see me hanging out with one of my favorite dudes of all time, Charles Darwin.
Posted by davor at 2:18 PM No comments:

The Starpress.com reports that at 7:55 this morning local time, a rare earthquake struck Central Indiana. From the story by Nick Werner:

What makes today’s earthquake so rare is that it was centered in Greentown, about 13 miles southeast of Kokomo.

“They are so infrequent in central Indiana,” Steinmetz said.

The Indiana Geological Survey had no records of an earthquake this size in Central Indiana ever. He said he needed more time to research when — if ever — central Indiana had been the center of even a more minor earthquake.

The quake was a relatively mild 3.8 magnitude, and thankfully there hasn't been any reported damage. Indiana is home to a few faults, and when I spoke to Walter Gray of the Indiana Geological Survey this fall, he told me that the next couple years of his outreach efforts would be largely dedicated to earthquake awareness. Though Indiana is not located at the seam between two tectonic plates, as is earthquake-prone California, the potential for damaging earthquakes is considerable. I'll be writing more about Indiana earthquakes in the future, as it's one of the reasons I decided to start this blog.
Posted by davor at 11:00 AM 1 comment:

Email ThisBlogThis!Share to TwitterShare to FacebookShare to Pinterest
Labels: seismology

The Indiana Audobon Society has a wonderful photo pool on Flickr, which I heartily recommend following. Photographer Steve Gifford has been sharing striking photographs of Short-eared Owls, taken near Somerville, IN. Seeing an owl is such a rare treat. You can't help but stare at those eyes. 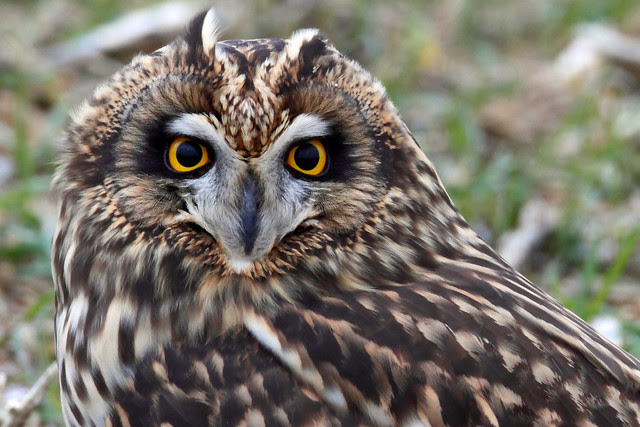 Photograph by Steve Gifford, via Flickr.
Posted by davor at 5:50 PM No comments:

Email ThisBlogThis!Share to TwitterShare to FacebookShare to Pinterest
Labels: birds

A Bryozoan in Lake Monroe

Today on the Scientific American Guest Blog, Jennifer Frazer writes about bryozoans. I was pretty thrilled to see that a video she linked to as a visual aid was shot right here in Monroe County, Indiana. It's short, but nicely illustrates this obscure organism. Frazer gives a fantastic introduction to the bryozoan clan, writing:

Bryozoans are like the whales of the coral world -- they are not coral, but have evolved into the same filter-feeding polyp-like niche. They're really old -- like 500,000,000 years old. And some bizarre details of their biology have helped them elude the best efforts of biologists to try and pin them down in the Earth family tree.

Head over to SciAm for the rest. Frazer writes The Artful Amoeba and tweets, too.

Here's a fossilized bryozoan I photographed at Falls of the Ohio State Park in September. 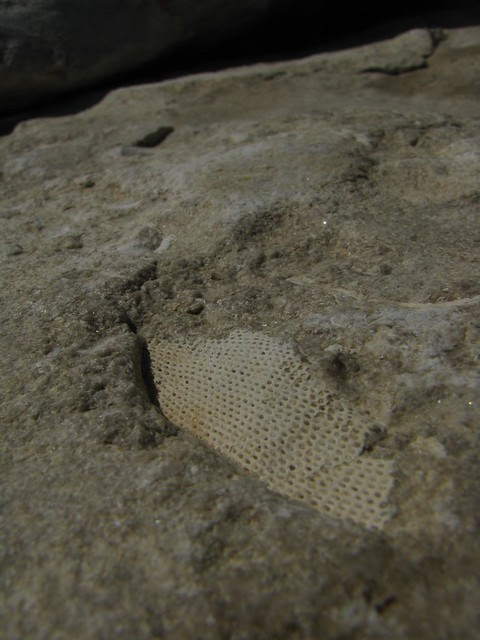 You should also head over to Mike Popp's great blog Louisville Fossils and Beyond for his own post on bryozoan fossils, posted today. If you aren't following his blog, get with it! It's a daily must-see.

The Guest Blog is also a consistently great read. That tireless promoter of online science communication, Bora Zivkovic, has really raised its importance since taking the lofty title of Chief Editor and Community Manager for SciAm, bringing in a diverse group of bloggers to contribute on all kinds of scientific topics. Speaking of which, you might be something from yours truly popping up there pretty soon...
Posted by davor at 11:25 PM No comments:

I've picked up one or two fossils on the side of the road, but can you imagine finding an enrolled trilobite, clean as if it had been carefully prepped?

My main reason for posting this video is to point out what a shame it is that Indiana doesn't have its own state fossil. The Indiana Geological Survey's Jeff Kirby wrote in 1998,

About 10 years ago several interested organizations and individuals were involved in an effort to have the crinoid Cyathocrinites multibrachiatus officially designated by the state legislature as Indiana's state fossil. The effort was unsuccessful, however, and Indiana does not have an official state fossil.

To see Cyathocrinites, take a look at the nice photos at Fossil Museum. I wonder what's behind this? Is it that Cyathocrinites just isn't dramatic enough? If Indiana boasted Mesozoic strata would we have a state fossil? If it's a big, charismatic vertebrate legislators want, we certainly have plenty of Ice Age mammals that would fit the bill.

Or maybe the problem is that there's just not enough of a public will for the state to recognize a fossil. At any rate, I'm looking into this subject. There isn't much information about the effort on-line, so I'll be doing the old-fashioned kind of research. Hopefully I'll turn up some good information. If anyone reading this has anything to share on the subject of the nonexistent Indiana state fossil, please feel free to email me at chasmosaurs(at)gmail(dot)com or leave a comment to this post.

UPDATE!
Hey all. After reading the comment left by Double Beam, I wrote to the Cincinnati Dry Dredgers to ask about the locality of the fossil. Unfortunately, they were not able to provide an exact spot, as Mike wrote in a subsequent comment, the southeastern part of Indiana is the best place to find Ordovician fossils. Jack Kallmeyer from the Dry Dredgers wrote that "Isotelus and Flexicalymene trilobites are widespread throughout the Cincinnatian and can literally be found at almost any exposure. The best places to look would include sites exposing the Waynesville Formation or the Corryville." Thanks for the quick answer, Jack!
Posted by davor at 4:10 PM 5 comments: